(1) 1950: The first English-language daily born at height of war 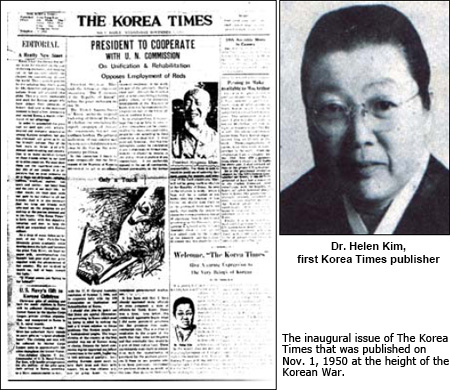 The Korea Times published its first issue on Nov. 1, 1950, during the height of the Korean War, with the aim of providing updates on the fratricidal war to readers inside and outside Korea. The Times is the longest-running independent daily and the gold standard in English-language journalism in Korea.

Dr. Helen Kim (1899-1970), the pioneer educator and journalist and the first Korean president of Ewha Womans University, came up with the idea of launching an English-language daily as a means of promoting the nation abroad in 1949, when she assumed Ewha's presidency. Her plan was put into action under the aegis of the U.S.-educated President Syngman Rhee.

The first issue came in the form of a two-page publication, headlined by an editorial, "A Really New Start," which noted the nation's need to promote goodwill, cooperation and mutual understanding with all countries in the world. The initial editorial team was comprised largely of a handful of English literature professors from Ewha. 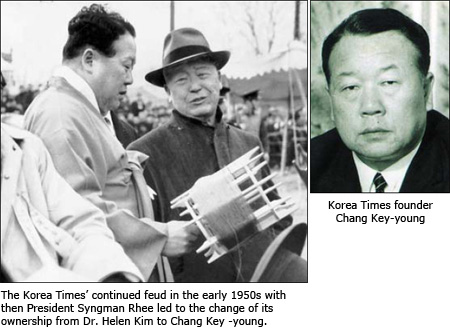 The Korea Times maintained close relations with the Rhee government but later found itself in serious trouble when the government turned into a dictatorship that completely controlled the state and limited journalistic freedom, among other things. When the government started to meddle in The Times' operations, the newspaper led public criticism of Rhee's authoritarian rule.

In response, Rhee who was, until then, an avid reader of The Korea Times, stopped the government's purchase of copies of the newspaper and pressured publisher Helen Kim into following an editorial direction favoring the government. His ever-growing feud with the recalcitrant Times prompted the president to think about founding a new English-language newspaper that would be obedient to the authoritarian government.

The mounting administrative pressure put The Korea Times in a serious financial pinch. The newspaper was subsequently taken over by Chang Key-young, then president of the vernacular newspaper the Chosun Ilbo and later founder of the Hankook Ilbo. Chang, who also served as vice governor of the Bank of Korea and later as deputy premier and economic planning minister, took the helm of the English-language daily on April 23, 1954, while also running a number of other publications, including the flagship daily Hankook Ilbo, a children's daily and business newspapers.